5 July 2017 - A circular 11.5km / 7 mile route through beautiful rolling countryside in Lot et Garonne. A good mix of open countryside and woodland with lots of nature interest, and starting with the historic village of Frespech.

Map Note - CAUTION -  The map for this walk produced by Lot et Garonne is WEST UP, not North up as normal: Mouseover/Click thumbnail
for larger map

Selected from the Lot-et-Garonne walking routes which are online and also available as a CD, I found myself driving around the quiet village of Frespech which is about 20km north east of Agen,  just off the D656 Cahors road. There is plenty of easy and free parking, either at the Mairie / Salle de fetes or in the village square nearby.

A sunny day in early July promised warm temperatures, so with no clear evidence of refreshment en route, so along with cameras and the usual gear, I set out with 3 water bottles weighing me down.

However I was soon drawn into the historic ramparts (1) of the Chateau and church of the village much of which dates from the 12th Century. When you take in the village’s location on a high promontory it’s easy to understand why it was developed as a defensive position a millennium ago. 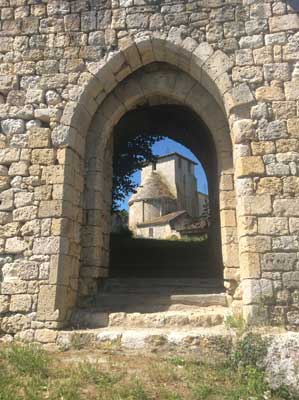 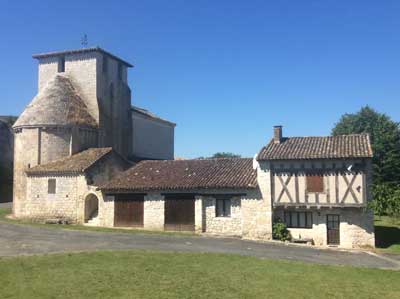 Frespech was on the frontier for much of the Hundred Years War between England and France, and was in English hands for much of that time, finally being retaken by the French in 1453

The old buildings you see today were restored and protected during the 1960s and 1970s, and make a pleasant and interesting visit whether you are walking or not.

The first stop on the walk as you head downhill out of the village (2)  is a short detour to ‘La Fontaine Lavoire’ – the old village spring and pond where the locals would gather to do their washing. Now a quiet corner, the old spring and pond are still there.

Immediately below this is an orchard which was planted in the 1970s when the old village sewage works was replaced by a modern eco reed bed system which the path passes a little further down the hill. Frespech received other new communal building works at the same time, with the Mairie and Salle de Fetes dating from the same period.

There is no hint of sewage as you head down into the valley under the village other than signs on the gates, and you are soon looking at a deserted mill (3) in the bottom of a valley before following the road up the hill, where just pass the farm at Lavignasse there is a beautiful view back across the valley to the village on the hill.

Soon after this take a sharp left turn along a level road which runs through a wood. Through here the butterfly life was wonderful – an assortment of species fluttering around, and a definite delight for any lepidopterist to enjoy – quite apart from the shade of the oak trees which on the day I was walking was indeed welcome.

Another left turn near Lamouthe (4) took me back off road, and along a wide and clear downhill path through a wood, with continuing presence from numerous butterflies before reaching La Mélounayre with more superb views over the rolling landscape.

A level section which crosses one of the roads out of Frespech then followed: This could be used to climb back up to Frespech to make a walk of about 3.5km if required. I followed the track along, passing fields of sunflowers, cereals and also onions, which when downwind smelt absolutely divine with their gentle aroma reminiscent of the finest onion soup imaginable.

Back into woodland as I approached Bois de Colombat (5),  footmarks in the mud suggested that deer and also boar may be seen in the area.

The shade of the woodlands was most welcome as the clear blue sky and sun pushed the temperature up just above 30C as I began the steady uphill climb towards Breillat: All the while, the paths were wide and easy to walk on, and the yellow markings clearly visible at around head height on various trees, poles and posts along the route. 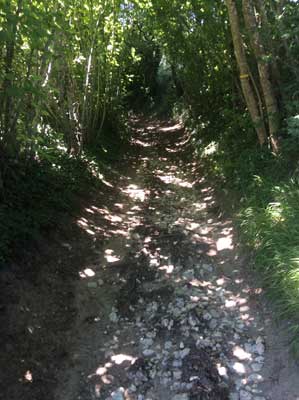 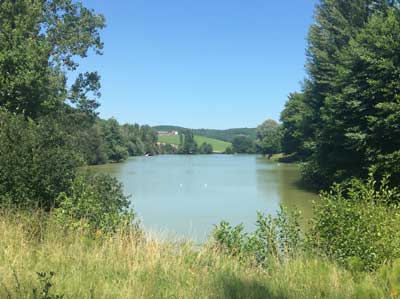 The hardest section of the whole walk then followed, with a rough but clear track rising sharply at Palombiere, and I was more than glad I had bought my stout boots with me as I climbed steadily uphill.

The path soon levelled out, and I arrived at an abandoned windmill standing in a good sized plot of land which was just screaming out to be converted into a character residence with quite the finest of views,  the impressive tower at Hautefage La Tour visible in the distance.

Downhill towards Boussagou, it was back into woodland where the Owners had made a few features along the path, and then continuing downhill, there was quite a long road section past La Tuilerie with lovely valley views. In the bottom of the valley was a surprise with a water ski school in action on a small long lake before the road turned to the south (6) 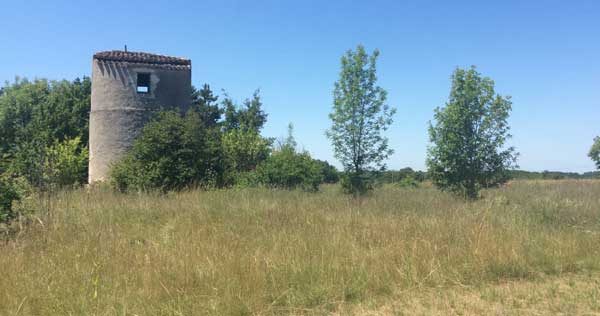 A long section through open cereal fields followed, and at the end the path headed uphill past Garbil before picking up the access road to that house for a short distance.

More woodland alive with butterflies and birds followed, passing Fonpesquière (7) before a rising track to the road.

A sharp left turn takes you towards a house off the road…. But suddenly you are facing an ‘X’ marker (8) . Temporary or not, where you should head was not that clear, but as you head towards the house you should leave the road to the left and head towards a telegraph pole in the middle of the field, before heading for a tall hedge just beyond the house.

The path then goes back into woods with some carefully placed ancient rocks along the way before you reach the road and turn right along it to the houses at Audubert. Shortly after a sharp left hand bend, the path leaves the road to the right (9) where you have a view across the village of Frespech.

Coming up behind the houses, a left turn at the road brings you back to Frespech.

A delightful circular walk which will have attractions for all seasons – I caught the onset of the butterfly season just as the sunflowers were coming out: A few weeks before there would have been a plethora of wild flowers, and the autumn would bring beautiful colours throughout the woodland.